Chairman of the Congressional Committee

Alice was appointed the chairman of the NAWSA's Congressional Committee in 1912. 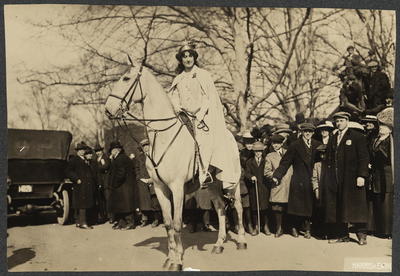 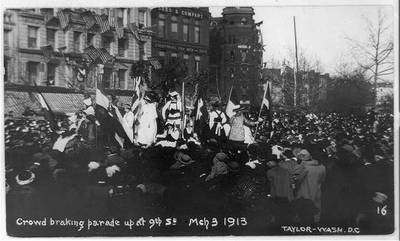 Spectators attempt to block the parade [Library of Congress, 1913]
Click on pictures to enlarge and see captions.
This parade proved to be a stroke of genius and garnered national attention.
During this time, Alice also organized the first deputation of women to ask a president for support on a national suffrage amendment. However, as shown through the letters exchanged between Alice and the president, Mr. Wilson was often reluctant to meet with the suffragists. 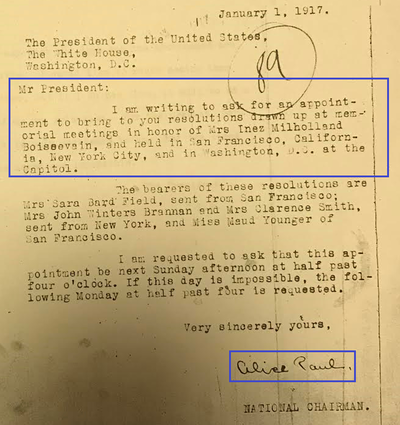 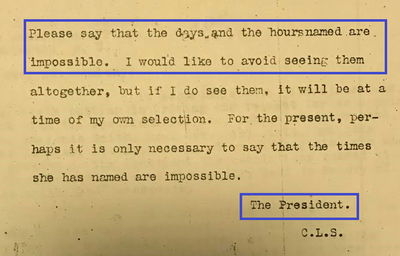 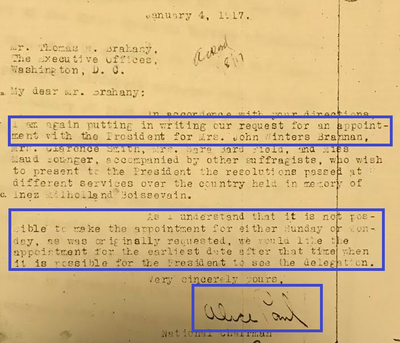 Letter written by Alice Paul to the Executive Office [Alice Paul Institute, 1917]
Click on pictures to enlarge and see captions.

"For the youthful Alice Paul [the parade] was a significant step in rejuvenating the cause of woman suffrage in America. Through it she succeeded in establishing an identity for herself and her little band of followers. She used the Washington spectacular as a starting point for other action-oriented techniques which differed dramatically from the more traditional approaches of the National American Woman Suffrage Association"
- Sidney R. Bland, author of "​New Life in an Old Movement: Alice Paul and the Great Suffrage Parade of 1913 in Washington, D. C."

Differences in opinion eventually caused the Congressional Union to secede from the NAWSA. Eventually, the National Woman's Party (NWP) was created.

"Forward Out of Darkness, Forward into Light"
-Official slogan of the NWP

The NWP was extremely different from any suffrage organization that America had seen before. These women were very assertive, and they went against many societal norms to get their message across.
The NWP became the first group to ever picket the White House on January 10th, 1917, which was something that the NAWSA had always been reluctant to do. 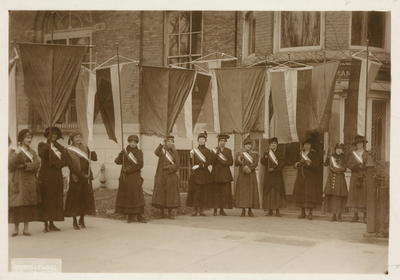 First suffragists to picket the White House [Library of Congress, 1917] 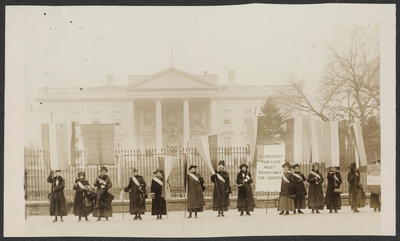 Women picketing outside White House gates [Library of Congress, 1917]
Click on pictures to enlarge and see captions.
In total, 168 women went to jail for picketing. Many of them went on hunger strikes in order to be released, which garnered national publicity.

"The picketers began to be arrested on the trumped up charge of 'obstructing traffic,' and were jailed when they refused to pay the imposed fine. Despite the danger of bodily harm and imprisonment, the suffragists continued their demonstrations for freedom unabated"
​-"Who Was Alice Paul?", Alice Paul Institute

Suffragists did not give up, even after being put in jail. They demanded to be treated as "political prisoners". To protest their imprisonment, women also participated in hunger strikes while in jail. They were sometimes brutally force-fed by government officials, which actually increased publicity and support for the women.​
As their protest became more aggressive, women faced heavy backlash.
After months of protests, President Wilson finally agreed to publicly support the suffrage amendment.

"No one can doubt [that] Alice Paul's tactics placed Wilson in an untenable position. The president, in order to maintain at least the appearance of integrity and consistency, made a political rather than a principled decision to support the woman suffrage amendment"
-Sally Hunter Graham, author of "Woodrow Wilson, Alice Paul, and the Woman Suffrage Movement"

Time and time again, Alice proved her assertiveness through her upfront and persistent protests. From parades to picketing, Alice was not only able to gain national publicity for the movement, but also make it impossible for the government to ignore women's suffrage for any longer.